It was a weekend of firsts for the newly formed Tony Stewart Racing (TSR) as Matt Hagan muscled his Dodge Power Brokers Charger SRT Hellcat Funny Car from the No. 1 qualifier position to a final round appearance at the 37th annual National Hot Rod Association (NHRA) Arizona Nationals at Wild Horse Pass Motorsports Park.

A three-time winner at the Phoenix event, Hagan and his Dodge Charger SRT Hellcat rocketed to the top of the timing sheets with the final qualifying pass, a 3.823-second effort @ 333.41 mph to reset the category’s previous track record of 3.826 seconds and post the quickest Funny Car pass in more than four years, earning the team’s first No. 1 qualifier position and the 44th of his career.

From the top rung of the eliminations ladder, Hagan launched into Sunday with quick starts and consistent 3.850, 3.864, and 3.875-second runs to claim round wins over Terry Haddock, Alexis DeJoria, and Tim Wilkerson and take TSR to its first NHRA final round appearance.

In a rematch of last weekend’s Winternationals semifinal, Hagan matched up with No. 2 qualifier Robert Hight to battle for the Wally trophy. Hagan was quicker on the tree to give the Dodge Power Brokers Charger SRT Hellcat the early lead when at the 600-foot mark a dropped cylinder moved them out of the groove to give the team its first runner-up finish after just two national events.

When it came to reigning Funny Car champion, Ron Capps, the driver/owner of the NAPA Auto Parts Dodge Charger SRT Hellcat, Capps qualified in the No. 6 spot and was matched up against veteran Jim Campbell. Capps beat Campbell with a run of 3.849-seconds @ 331.20 mph, despite a slower reaction time.

Unfortunately, for the Ron Capps Motorsports team, they wouldn’t make it past the second round of eliminations going up again, John Force. Capps was late off the light with a.151 reaction time and lost to Force, even with a faster run of 3.869-seconds versus a 3.902-second run by Force.

Fellow Dodge Charger SRT Hellcat driver Cruz Pedregon staged his Snap-on Tools Funny Car for eliminations from the No. 5 spot on the ladder for his 625th national event appearance to put him third on the all-time list. After reaching a milestone 600 round wins last weekend at the Winternationals with his semi-final appearance, Pedregon added another by turning on the win lights in the opening round against Jeff Diehl. In his quarterfinal match-up with Tim Wilkerson, the Cruz Pedregon Racing machine took the early lead but lost a good battle to the finish line.

In Top Fuel action, TSR pilot Leah Pruett, a two-time winner at Phoenix, kicked off the weekend by powering her Dodge//SRT dragster (sporting the Sparkling Ice + Caffeine livery) to a strong first qualifying run to put her third on the timesheets with a 3.703-second pass @ 328.22 mph. Unable to improve on that first pass, the time put her ninth on the eliminations ladder and set up a first-round matchup against No. 8 seed Josh Hart.

The opening round battle saw Pruett take her 11,000+ horsepower HEMI-powered dragster for a 3.699-second pass, her quickest run of the weekend, against her opponent’s 3.705-second slower lap which unfortunately combined with his quicker start, helped him score a holeshot win.

While disappointed with her performance in the first two national events of the season, Pruett is focused on the positive progression her new team is making and looking forward to the upcoming NHRA Gatornationals where her Dodge Power Brokers dragster will also be among the eight competitors battling in the NHRA Top Fuel All-Star Callout.

The field for the specialty race is set based on a combination of the 2021 season-end points and qualifying points from the first two events of 2022, with reigning Top Fuel world champion Steve Torrence already set as the top seed. The No. 1 seed will “call out” his first choice of an opponent on Friday at the Gainesville, Florida, national event with the next pick going to the No. 2 seed and down the line. Pruett is seeded sixth for the first of three rounds set to take place during Saturday qualifying at the Gatornationals set to take place March 10th to the 13th.

We Get Up Close With Mopar’s Mopar-Modified Wrangler Unlimited Rubicon:

Dodge Announces The Winners Of Operation 25//8!

Hagan Takes His Charger To The Finals At The NHRA Arizona Nationals!​

Pruett Goes Out In First Round Of Eliminations...​

It was a weekend of firsts for the newly formed Tony Stewart Racing (TSR) as Matt Hagan muscled his Dodge Power Brokers Charger SRT Hellcat Funny Car from the No. 1 qualifier position to a final round appearance at the 37th annual National Hot Rod Association (NHRA) Arizona Nationals at Wild Horse Pass Motorsports Park. 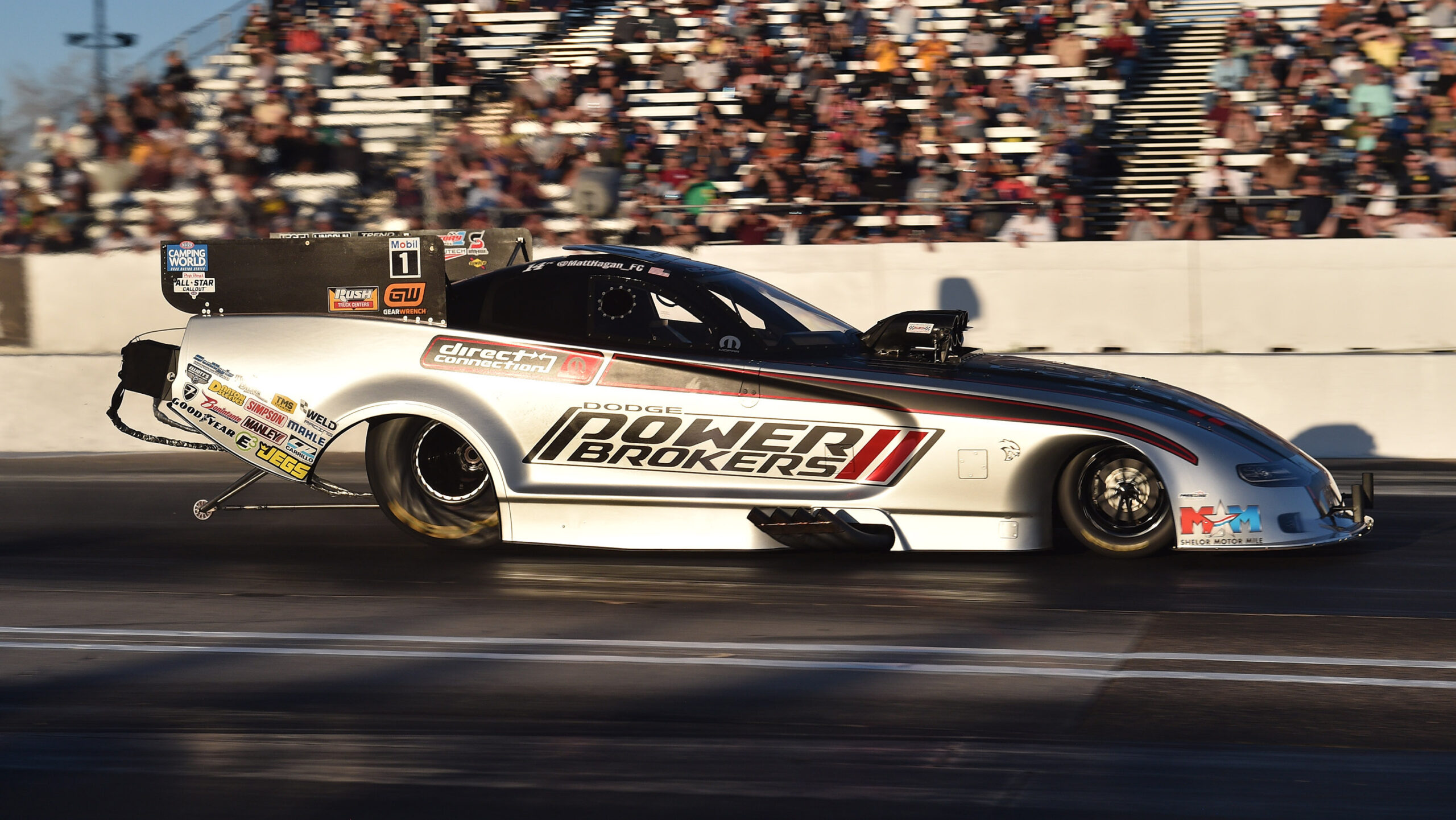 Hagan Takes His Charger To The Finals At The NHRA Arizona Nationals!


It was a weekend of firsts for the newly formed Tony Stewart Racing (TSR) as Matt Hagan muscled his Dodge Power Brokers Charger SRT Hellcat Funny Car from the No. 1 qualifier position to a final round appearance at the 37th annual National Hot Rod Association (NHRA) Arizona Nationals at Wild...