But what you may not know, is that it isn’t the first drag racing-oriented Challenger to carry the Super Stock nameplate.

Hot on the heels of the 2006 Dodge Challenger R/T Concept, Dodge and Mopar introduced its Challenger Super Stock Concept to highlight the introduction of a new 392 HEMI crate motor at the 2006 Specialty Equipment Market Association (SEMA) show.

Dodge would take the Challenger racing in the National Hot Rod Association’s (NHRA’s) Pro Stock class. At the time, the 426 HEMI Challenger would prove to be a force to be reckoned with on the drag strip. So it made sense for Mopar to introduce a modern HEMI crate motor, that it would use its new Dodge Challenger R/T Concept to showcase it.

To create the Super Stock Concept, the Dodge design team utilized a cut-down Dodge Magnum SRT8 chassis and handcrafted carbon-fiber body panel working with the dimensions of the concept car shown earlier in the year, at the North American International Auto Show (NAIAS) in Detroit.

The Mopar team then stuffed its new fuel-injected 392 HEMI V8 Mopar crate that delivered 525 horsepower and 510 lb.-ft. of torque. The motor was mated to an A999 TorqueFlite transmission with a manual valve body and Turbo Action 3800 stall-speed converter.

So just how fast was the Dodge Challenger Super Stock Concept? Edmunds InsideLine raced the car down the 1/4-mile at Las Vegas Motor Speedway in April of 2007, with a pass of 11.53 seconds @ 114 mph. Just for comparison, our long-term 2019 Dodge Challenger R/T Scat Pack 1320, ran a pass at Mission Raceway Park with a pass of 11.92 seconds @ 113.96 mph. Right on the heels of the drag racing purpose-built concept.

When the car made its debut at the 2006 SEMA show, it was wearing a patriotic paint scheme. Soon after the show, the car was repainted and then featured a Matte Black paint scheme. Unlike the 2018 production model, the Super Stock like the Challenger R/T Concept featured a unique crosshair grille and a unique horizontal taillight design that featured neon instead of LEDs.

The Challenger Super Stock Concept would be a preview of the Mopar Dodge Challenger Drag Pak factory race cars, that would eventually come to market in a few years. Since then, Dodge and Mopar have built a limited number of factory-built race cars every few years.

Hagan Is No. 1 Qualifier Going Into The 2019 Auto Club NHRA Finals:

Hot on the heels of the 2006 Dodge Challenger R/T Concept, Dodge and Mopar introduced its Challenger Super Stock Concept to highlight the introduction of a new 392 HEMI crate motor at the 2006 Specialty Equipment Market Association (SEMA) show. 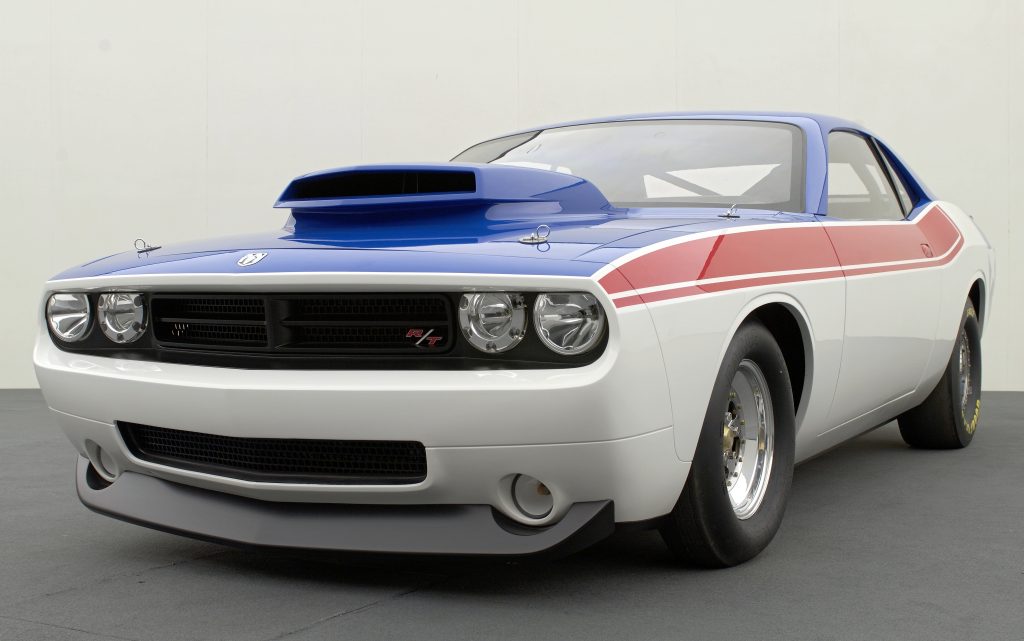 
Hot on the heels of the 2006 Dodge Challenger R/T Concept, Dodge and Mopar introduced its Challenger Super Stock Concept to highlight the introduction of a new 392 HEMI crate motor at the 2006 Specialty Equipment Market Association (SEMA) show.